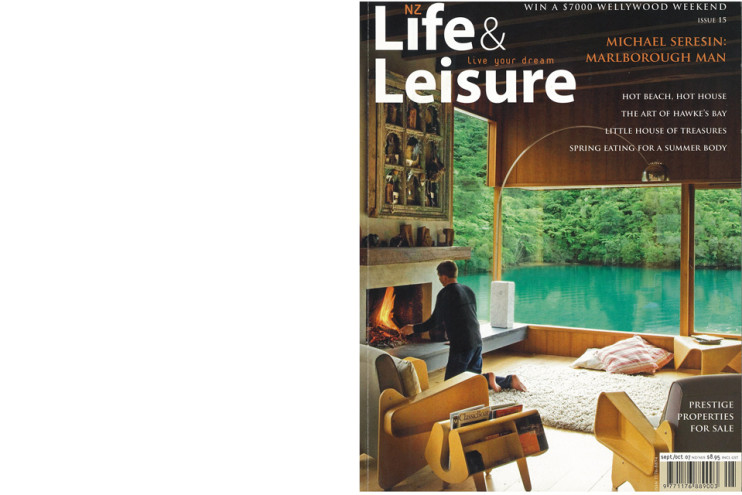 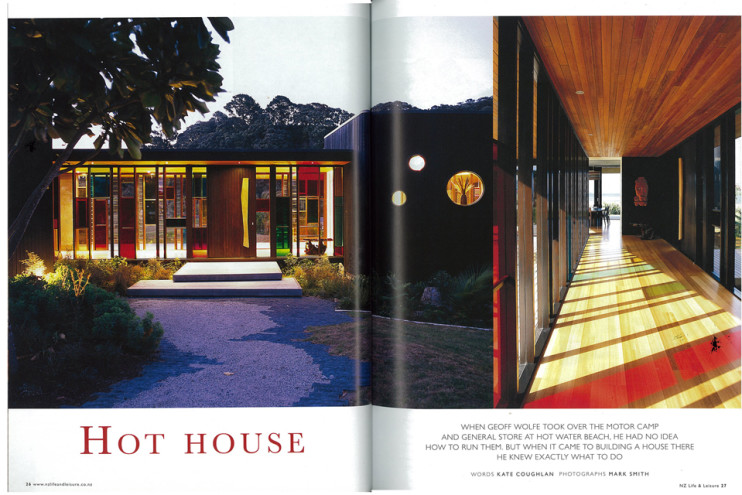 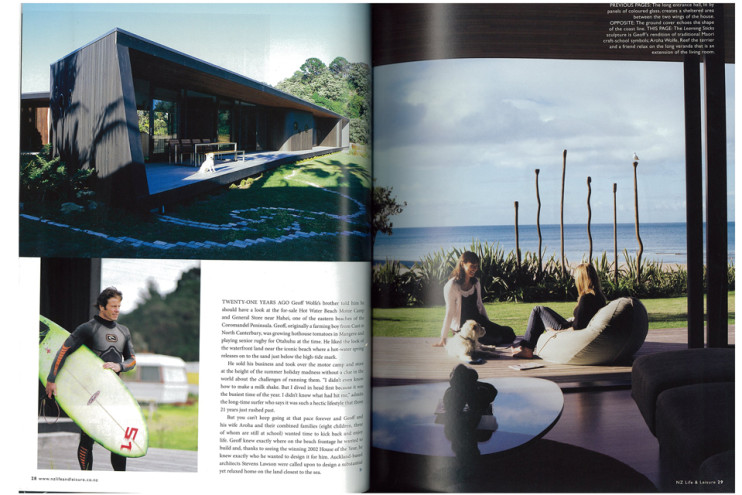 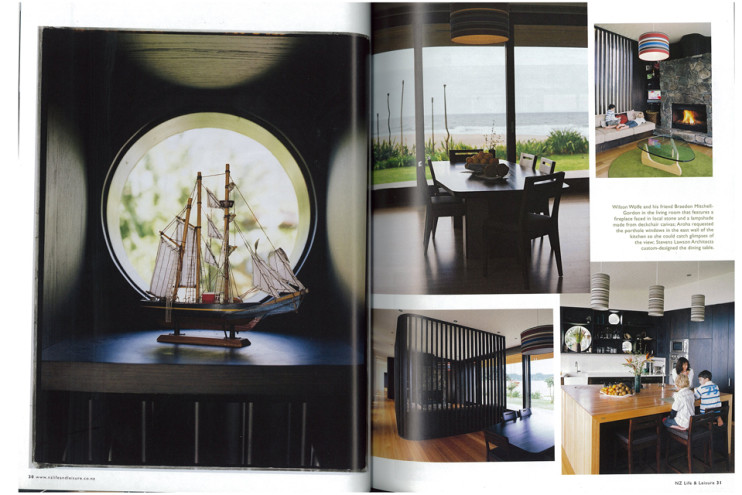 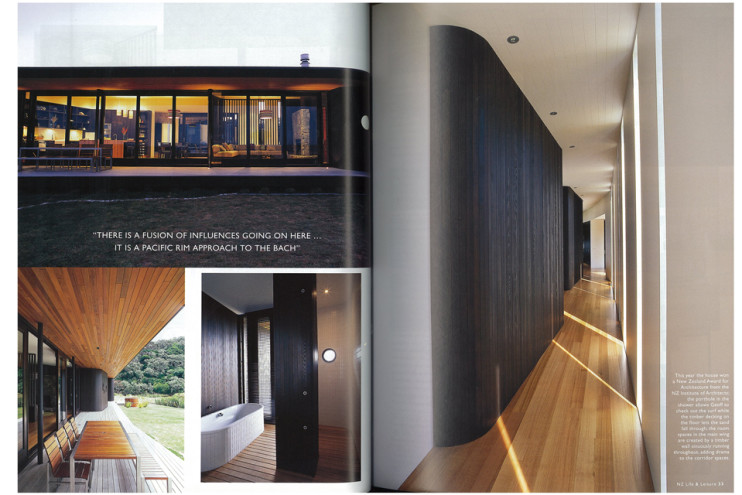 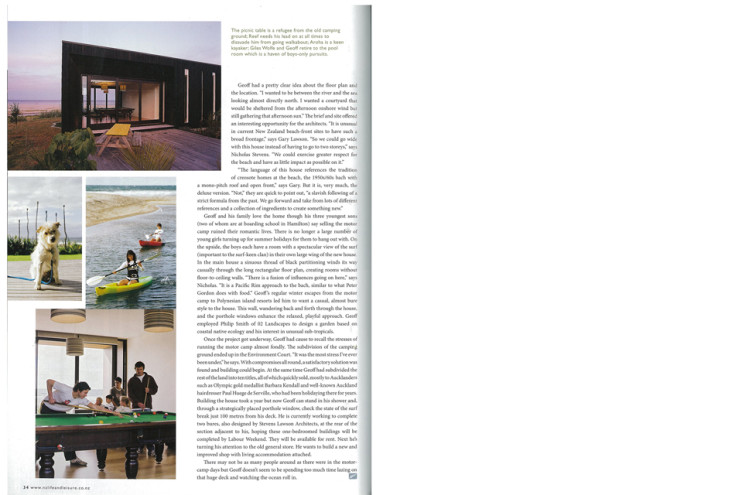 When Geoff Wolfe took over the motor camp and general store at Hot Water Beach, he had no idea how to run the. But when it came to building a house there, he know exactly what to do.

Twenty-One Years ago Geoff Wolfe’s brother told him he should have a look at the for-sale Hot Water Beach Motor Camp and General Store near Hahei, one of the eastern beaches of the Coromandel Peninsula. Geoff, orignially a farming boy from Cust in North Canterbury, was growing hothouse tomatoes in Mangere and playing senior rugby for Otahuhu at the time. He liked the look of the waterfront land near iconic beach where a hot-water spring releases on to the sand just below the high-tide mark.

He sold his business and took over the motor camp and store at the height of the summer holiday madness without a clue in the world about the challenges of running the. “I didn’t even know how to make a milk shake. But I dived in head first because it was the busiest time of the year. I didn’t know what had hit me,” admits the long-time surfer who says it was such a hectic lifestyle that those 21 years just rushed past.

But you can’t keep going at that pace forever and Geoff and his wife Aroha and their combined families (eight children, three of whom are still at school) wanted time to kick back and enjoy life. Geoff knew exactly where on the beach frontage he wanted to build and, thanks to seeing the winning 2002 House of the Year, he knew exactly who he wanted to design it for him. Auckland-based architects Stevens Lawson were called upon to design a substantial yet relaxed home on the land closest to the sea.

Geoff had a pretty clear idea about the floor plan and the location. “I wanted to be between the river and the sea looking almost directly north. I wanted a courtyard that would be sheltered from the afternoon onshore wind but still gathering that afternoon sun.” The brief and site offered an interesting opportunity for the architects. “It is unusual in current New Zealand beach-front sites to have such a broad frontage,” says Gary Lawson. “So we could go wide with this house instead of having to go to two storeys,” says Nicholas Stevens. “We could exercise greater respect for the beach and have as little impact as possible on it.”

“The language of this house references the tradition of creosote homes at the beach, the 1950s/60s bach with a mono-pitch roof and open front;’ says Gary. But it is, very much, the deluxe version. “Not,” they are quick to point out, “a slavish following of a strict formula from the past. We go forward and take from lots of different references and a collection of ingredients to create something new,” Geoff and his family love the home though his three youngest sons (two of whom are at boarding school in Hamilton) say selling the motor camp ruined their romantic lives. There is no longer a large number of young girls turning up for summer holidays for them to hang out with. On the upside, the boys each have a room with a spectacular view of the surf (important to the surf-keen clan) in their own large wing of the new house. In the main house a sinuous thread of black partitioning winds its way casually through the long rectangular floor plan, creating rooms without floor-to-ceiling walls. “There is a fusion of influences going on here,” says Nicholas. “It is a Pacific Rim approach to the bach, similar to what Peter Gordon does with food.” Geoff’s regular winter escapes from the motor camp to Polynesian island resorts led him to want a casual, almost bure style to the house. This wall, wandering back and forth through the house, and the porthole windows enhance the relaxed, playful approach. Geoff employed Philip Smith of 02 Landscapes to design a garden based on coastal native ecology and his interest in unusual sub-tropicals.

Once the project got underway, Geoff had cause to recall the stresses of running the motor camp almost fondly. The subdivision of the camping ground ended up in the Environment Court.” It was the most stress I’ve ever been under;’ he says.With compromises all round,a satisfactory solution was found and building could begin.At the same time Geoff had subdivided the rest of the land into ten titles, all of which quickly sold,mostly to Aucklanders such as Olympic gold medallist Barbara Kendall and well-known Auckland hairdresser Paul Huege de Serville, who had been holidaying there for years. Building the house took a year but now Geoff can stand in h is shower and, through a strategically placed porthole window, check the state of the surf break just 100 metres from his deck. He is currently working to complete two bures, also designed by Stevens Lawson Architects, at the rear of the section adjacent to his, hoping these one-bedroomed buildings will be completed by Labour Weekend. They will be available for rent. Next he’s turning his attention to the old general store. He wants to build a new and improved shop with living accommodation attached.

There may not be as many people around as there were in the motor-camp days but Geoff doesn’t seem to be spending too much time lazing on that huge deck and watching the ocean roll in.