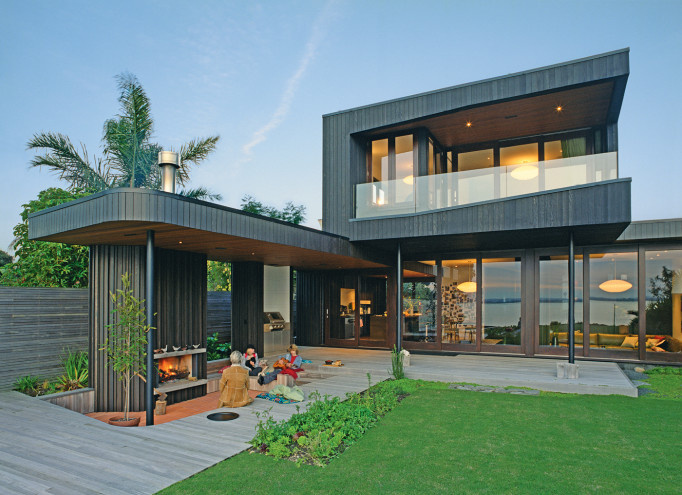 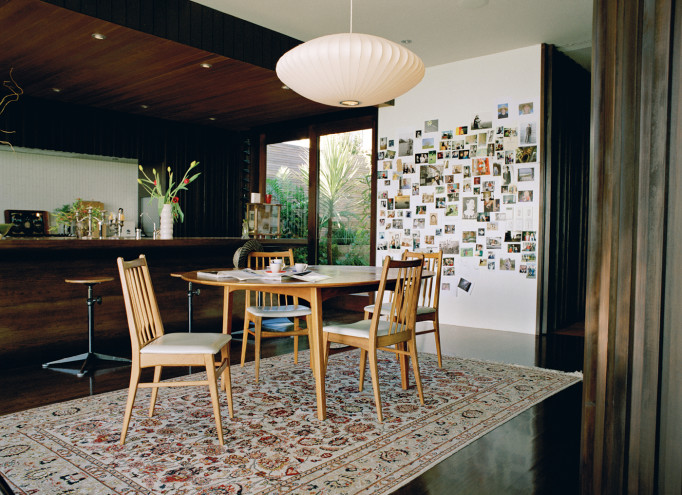 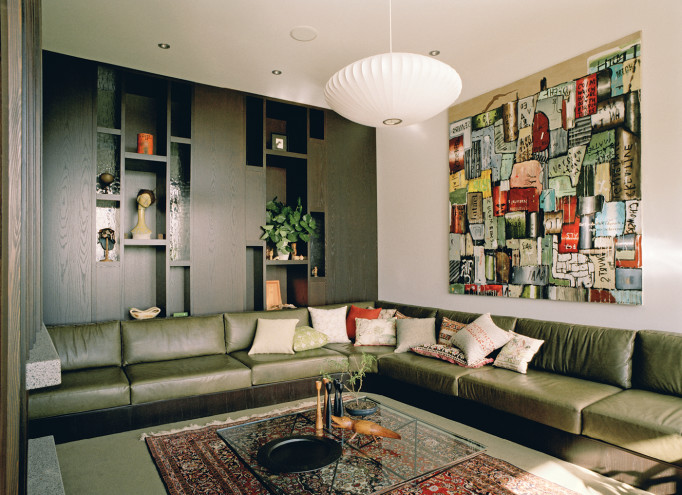 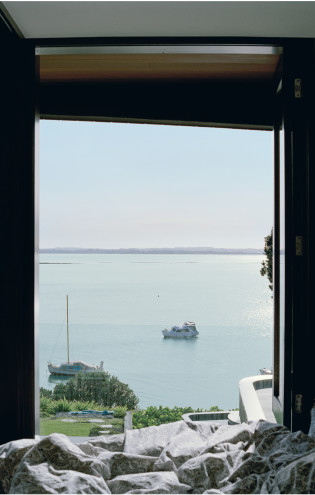 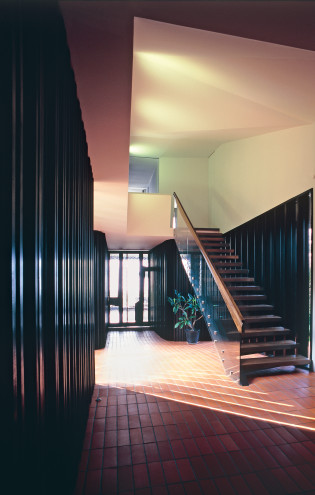 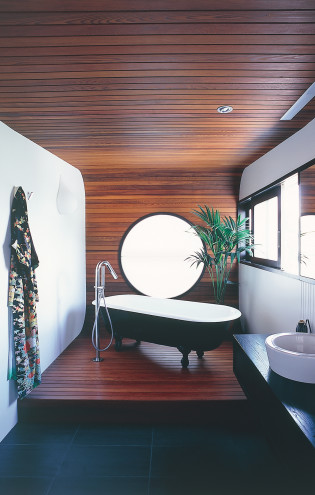 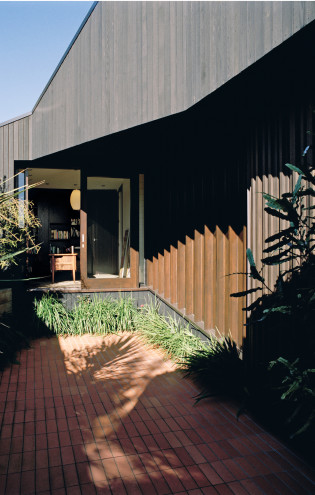 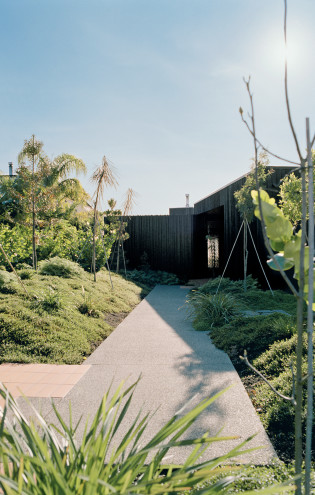 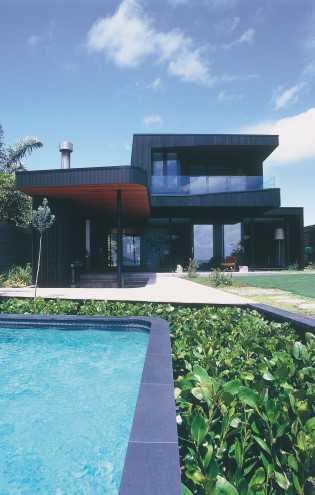 No more brassy, glassy house for showing off in. On a cliff above old boat ramps and Auckland’s tidal mudflats, Stevens Lawson Architects calibrate a home that feels as if it has always been part of the landscape.

The winner of the Home of the Year 2007 is an enigmatic dwelling that lies above tidal mudflats in the Auckland suburb of Westmere. From the street, it is mysterious, looking like a big old blackened log washed up on the bank, more of an abstract sculptural form than a house. Its unremitting blackness brings to mind old creosote baches, or the tar our dads would pitch our plywood dinghies with. It is a home that recoils from the street like a big black skink and slithers off towards the shore.

In recent years, Aucklanders (and I admit to being one) have embraced the big brassy, glassy house in which we can show off our sophisticated lifestyles and pretend we live in an Eden where it never rains or gets too cold. This home, in contrast, is reticent about its relationship to the street, turning the other way not to capture a classically spectacular sea view, but to reconnect with the old, upper harbour Auckland of wood and mud.

Designed by Nicholas Stevens and Gary Lawson of Stevens Lawson Architects, the home from the street has a moody discretion. It has a garden that looks a bit Japanese, full of ground cover and moss and young trees that will eventually form a little forest to shroud its public façade. It is folded like black origami, while timber battens on some of the walls hint at a manuka fence or palisade. It peels open briefly to reveal the black maw of the porch and a door that is a big, broken frosty star of dark timber and glass.

Inside the door, the home feels like a continuation of the exterior, with the same terracotta tiles that stud the driveway following the terrain down a hallway that runs in a series of ramps or slipways towards the harbour. The walls are fashioned from the same dark battens we see outside, interspersed with tall, narrow strips of glass. It is like a long tunnel, mangrove dark at times, but at others illuminated with sunlight that slices through the windows punctuating its sides. There is barely a right angle anywhere; the walls and ceilings are all faceted planes with the alien geometry of a stealth bomber.

At the end of the tunnel there is no big reveal, no panoramic harbour-grabbing vista. Stepping down to one side is a snug sunken living area, a good place to hunker down and ride out north-easterly storms. But the big central pathway through the house doesn’t culminate in the living area or kitchen: it goes past them, drawing the visitor out to a little pool, a barbecue spot, and a last vestige of lawn on this shelf above the vast mudflats.

Where the street aspect of this long, linear house is like the split end of a wedge, the seaward side is like a couple of stacks of logs ready for a big fire on the beach. The cliff face has been left untidied, still sporting a rough boat ramp and rusty davits and flotsam and jetsam around the spot where the previous owner spent 30 years building little boats. Indeed, the current owners’ boat is no plush SUV of the sea, but an old kauri job that rests on the mudflats waiting for some water and seems as much a part of the house as any of the other rooms. Hang on – rooms? What rooms?

Back inside, it’s hard to find the rooms we’ve walked past. Some have hidden doors worked seamlessly into the rippling walls of dark timber batten. Each of the four bedrooms, as well as a studio, study and TV room, split away from the central lane and are divided from each other by little courtyards which, with all their planting, will soon be chocka with bush. To one side, the stairway disappears upstairs and where we would normally find a big plush master bedroom, the space is split, like the branches of a pohutukawa abruptly dividing, into a couple of bed areas joined by a sliding door.

This is an introspective home, like a series of clearings in the forest, but it also feels like a big dwelling despite being built on a tight site. It isn’t overlooked by neighbours and even though the family can all come together in the living areas at the front, there are plenty of lovely little rooms to slip away to. “It’s a house that soaks people up,” one of the owners says.

There is nostalgia here, too. This isn’t a big transparent Auckland box – a notion the owners emphatically rejected, instead expressing a desire for a place that was impossible to identify with any particular period. In some ways, the home seems a throwback to the woodsy style of the Group Architects in the 1950s, and to the big raftered timber houses of our parents, with their dark mahogany couches and cocktail cabinets, deep snugs and conversation pits. If a house can be like a book, this one reminds me of Kirsty Gunn’s novella Rain – idiosyncratic, mysterious and anchored by an uncannily strong sense of place. Its unique character provokes a refreshingly emotional response rather than one shaped by notions of style or coolness. It is tailored to its owners’ desires, and is never flashy or pretentious.

The owners asked for a home in which they could “discover secret things – not ‘what you see is what you get’”. The home’s deeply crafted nature has something in common with other Stevens Lawson houses, but it is also a uniquely calibrated vision for living. It is a house you can’t look at only once, and I already want to go back and experience it all over again.

Also featured on the Herald here